Posted by actionsedition on August 27, 2014
Posted in: Uncategorized. Leave a comment

From the We Want Rebel Music blog , here’s a review of the Action Sedition / Streets of Rage split 10″…

Here’s a review from the good folks at Oi Oi Music! Thanks! 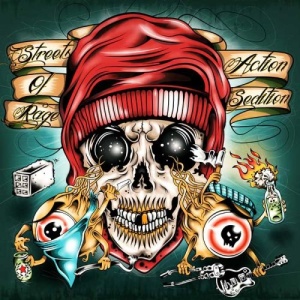 This is a release I was looking forward to. Streets Of Rage hail from France and released a full-length and split EP before while Action Sedition are a new band from the French speaking part of Canada.

On their previous releases Streets Of Rage made a huge impression on me with their melodic approach of streetpunk music. On their new recordings they moved away from the streetpunk sound and adopted a more hardcore orientated style. I’m not sure if they had a line-up change. However, the transmission to the new sound works out well and the band sounds quite natural, like they never have done different before.

The band recorded three songs, which are a little bit on the short side, but it’s the quality that counts. My favourite is Nancy Youth Crew, a song with typical HC breaks, sing-a-longs, etc.

Action Sédition from Quebeq, Canada released a debute CD by theirselves, but apparantly i missed that release. This split 10″ is their first release in vinyl format.

The band recorded three songs for this split EP, all sung in French. The band plays streetpunk but some guitarlines and drum rhythms disclose some d-beat influences from bands like From Ashes Rise or Wolfbrigade.

The band works with two vocalists, male and female, and especially on a song like Class Contre Class this works out very well, although opening song La Haine is an excellent song as well.